Learn About The Past,
Help Build The Future

Above is the original painting by Gale Stockwell that resides in Parkville Presbyterian Church.

I have lived in Parkville for many years now, celebrating our historic downtown area, the river, the parks and of course Parkville Days. It never really occurred to me to look up the history of Parkville Days, as I just assumed a small river trading town simply always had a carnival-type event. This is not a story of someone setting off to research a carnival, rather it is the story of how amazing things start, both in terms of art but also in terms of tradition.

I spend most days in Parkville Presbyterian Church, a peaceful and spacious place near my home that is welcoming, hospitable and peaceful. There is also so much history in this 175 year old church, history that spans to the beginnings of Parkville itself. I’ve looked at the paintings and the relics and pictures, but I really get a feel for the history when I speak with the elders of this church. There are members who love to share their stories and the stories they have collected in their mind over the decades this church and this community have been interacting. It was through one such story that I learned about Gale Stockwell, whose painting of Parkville Presbyterian Church always stood out as being an amazing representation, in watercolor, of our community church. I learned that Gale Stockwell was a member of our community as well as a talented artist, and that his artwork is somewhere in Washington D.C.. That led me to investigate a little further, as I was very interested to highlight the achievements of one of our members. What I found was this amazing story (https://www.parkvilleframegallery.com/gale-stockwell):

In 1971, local artist Gale Stockwell was shown something quite extraordinary. One of his students hands him the box of a jigsaw puzzle that was of a painting he had done in 1933 of Main Street Parkville, Missouri. Stockwell’s student had a friend that picked up the puzzle in a gift shop while visiting Canada. She went on to point out something else spectacular, on the cover of the box it said it was from the National Collection of Fine Arts of the Smithsonian Institute, Washington, D.C.

During the Great Depression a new program was initiated called the Works Projects Administration. It was started to give artists a chance to earn money by producing paintings and sculptures of public buildings. Each artist could earn $30 to $50 per piece if it was found satisfactory. On completion of the painting, Stockwell turned it in and was paid $30. After that he didn’t see it again for almost forty years.

While investigating further he found out it was presently hanging in the Press Secretary’s Office of Richard Nixon’s White House. Once word of this rediscovery rang out, Parkville residents were talking about how to bring the painting back. As it turns out, Duncan Findlay a 1922 Park Alumnus and Trustee and close friend to Ed Cox, husband to Tricia Nixon persuaded his friend to investigate on getting the painting loaned to Parkville, which he was successful in doing. On May 17, 1973 the painting arrived.
To celebrate the Homecoming of Stockwell’s painting, Parkville and Park College held a festival including a parade with Gale Stockwell as Grand Marshal, arts and crafts booths, a carnival and street dance. 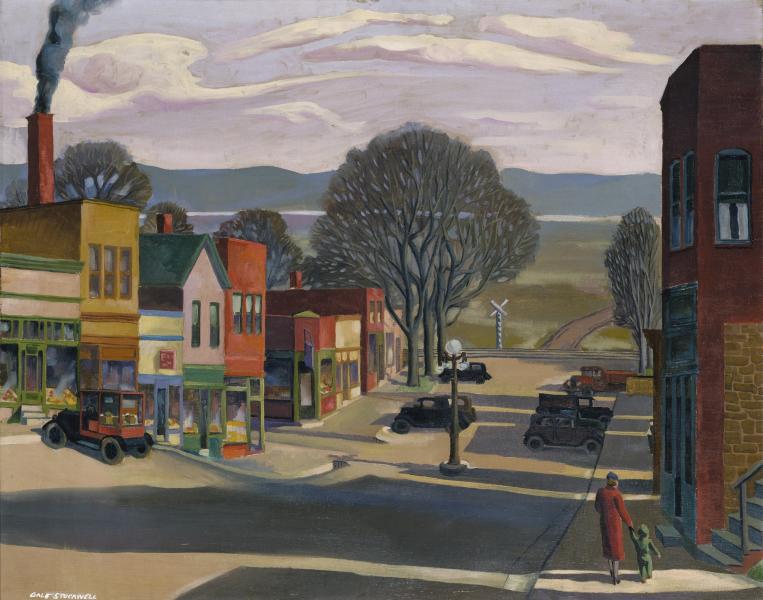 Please stop by if you are interested in learning more about Parkville’s rich history and all the ways our community has shaped that history, or email the church if you have any questions, stories to share, or simply want to talk.